- February 16, 2018
A new analysis by Stanford University professor Mark Z. Jacobson and colleagues shows that the world can be powered by 100% clean, renewable energy, with today's technology. 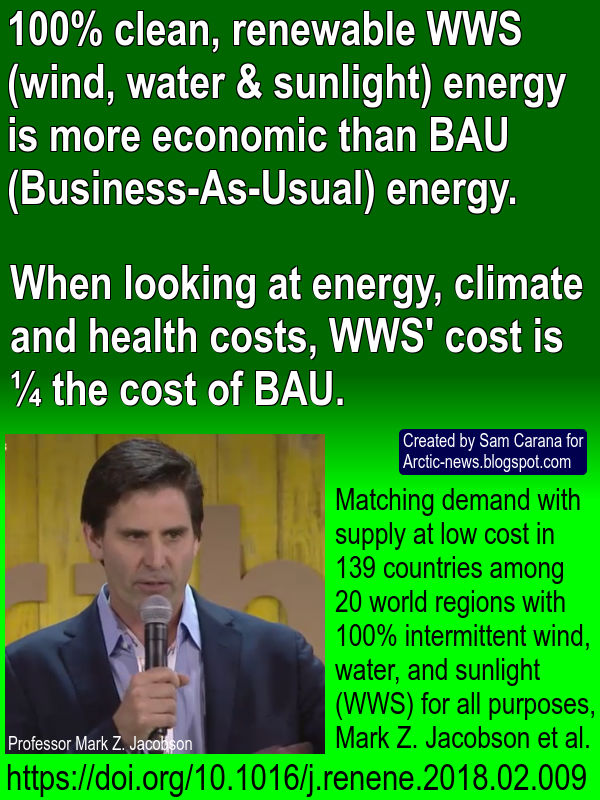 The analysis looks at different pathways, using different ways of energy generation (by wind, water and sunlight), in combination with storage, transmission, and demand response, concluding that the world can also be powered by 100% clean, renewable energy at a lower cost than a BAU (Business-As-Usual) scenario dominated by fossil fuel.

“Based on these results, I can more confidently state that there is no technical or economic barrier to transitioning the entire world to 100% clean, renewable energy with a stable electric grid at low cost,” says Jacobson.

Moreover, the price of fuel currently excludes the cost of health and climate damage caused by fuel. When including these costs, the cost of clean, renewable energy is ¼ the cost of BAU.

The price of fuel looks set to go up over time due to decreasing economies of scale for fuel and due to the cost of conflict associated with fuel. As an example, a 2017 report puts the cost of U.S. military intervention in Syria, Iraq, Afghanistan, and Pakistan over the period FY2001-FY2018 at $5.6 trillion, or $23,386 for the average taxpayer. The report adds that, unlike past US wars, these wars have been paid for largely through borrowing. The $5.6 trillion includes the interest the US has already paid on this debt, but it does not include projected future interest. Even if the US stopped spending money on these wars right now, cumulated interest costs on borrowing will ultimately add more than $7.9 trillion to the national debt over the next several decades.

For more on the benefits of feebates, see the Feebates page. The Climate Plan calls for dramatic cuts in emissions through such policies, while also calling for further lines of action.

• Matching demand with supply at low cost in 139 countries among 20 world regions with 100% intermittent wind, water, and sunlight (WWS) for all purposes, by Mark Z. Jacobson et al.
https://www.sciencedirect.com/science/article/pii/S0960148118301526

• Stanford engineers develop a new method of keeping the lights on if the world turns to 100% clean, renewable energy
https://news.stanford.edu/2018/02/08/avoiding-blackouts-100-renewable-energy

• Roadmap for Repowering California for all Purposes with Wind, Water, and Sunlight
https://arctic-news.blogspot.com/2014/06/roadmap-for-repowering-california-for-all-purposes-with-wind-water-and-sunlight.html