Showing posts from January, 2018
Show all

2017 was hottest year on record 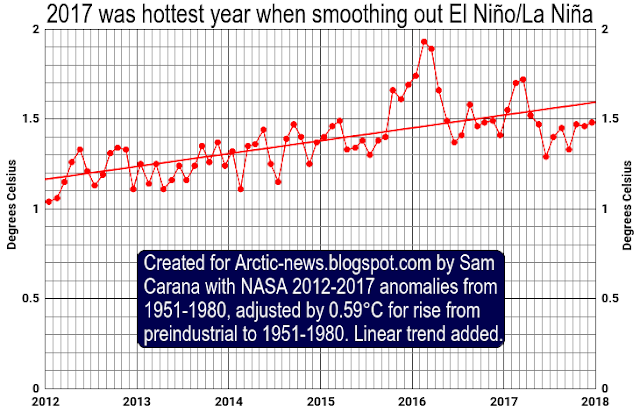 The year 2017 was the hottest year on record, as the image below illustrates. When determining which year was the hottest year, care should be taken to avoid bias due to temporary conditions such as the El Niño that was present in 2016 and the La Niña we're now experiencing now. Above image uses NASA land+ocean January 2012-December 2017 anomalies from 1951-1980, adjusted by 0.59°C to cater for the rise from preindustrial to 1951-1980, to calculate a linear trend that goes some way to smooth out variability due to El Niño/La Niña events. The trend shows that 2017 was significantly warmer than 2016. The trend also shows that 1.5°C above preindustrial was crossed back in 2016. This 1.5°C (or 2.7°F) was set at the Paris Agreement as a guardrail that was not to be crossed. The trend further shows that we've meanwhile crossed 1.6°C above preindustrial and we look set to cross the 2°C guardrail within years. Global warming has crossed 1.5°C / 2.7°F above preindustrial and looks set
Post a Comment
Read more 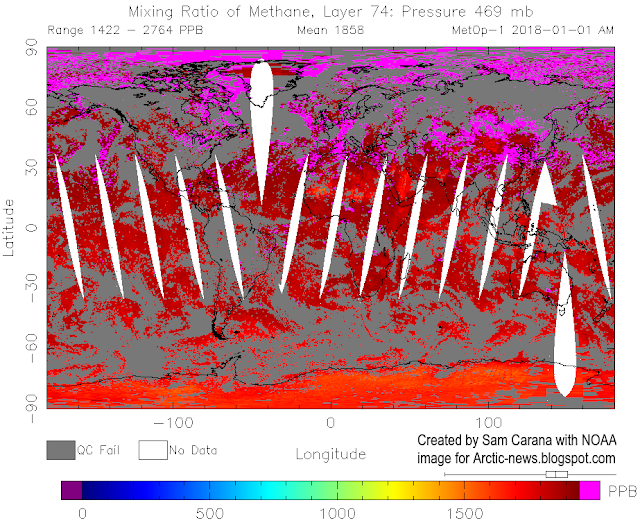 On January 1, 2018, methane levels as high as 2764 ppb (parts per billion) were recorded. The solid magenta-colored areas near Greenland indicate that this very high reading was likely caused by methane hydrate destabilization in the sediments on the seafloor of the Arctic Ocean. The state of the sea ice is behind this. On January 1, 2018, Arctic sea ice extent was at record low for the time of the year. The smaller the extent, the less sunlight gets reflected back into space and is instead absorbed in the Arctic. At this time of year, though, hardly any sunshine is reaching the Arctic. So, what triggered this destabilization? As the image below indicates, year-to-date average Arctic sea ice volume has been at record low in 2017, which means that there has been very little sea ice underneath the surface throughout 2017. Warm water will melt the sea ice from below, which keeps the water at greater depth cool. However, when there is little or no sea ice underneath the surface, little or
Post a Comment
Read more
More posts