Showing posts from August, 2017
Show all

How much could temperatures rise by 2026? The above image shows how a rise of 10°C (18°F) could occur by the year 2026, based on temperature anomalies from 1750 for February and on progressive growth of warming elements. The image below shows the same rise in another way. Such a rise could take place even more rapidly, as discussed in the earlier post 10°C or 18°F warmer by 2021?  For more on calculating the temperature rise from 1750 to 2016, see this page and this post . Crucial will be the decline of snow & sea ice and associated  feedbacks . Ominously, global sea ice is at a record low at the moment, as illustrated by the graph below by  Wipneus . [ click on images to enlarge ] Arctic sea ice extent on August 15, 2017, was the 2nd lowest on record for the time of year (behind only 2012), as illustrated by the image on the right. While extent was lower on August 15, 2012, Arctic sea ice is very thin at the moment, as the Arctic Ocean has become warmer, and sea ice could disappe
Post a Comment
Read more 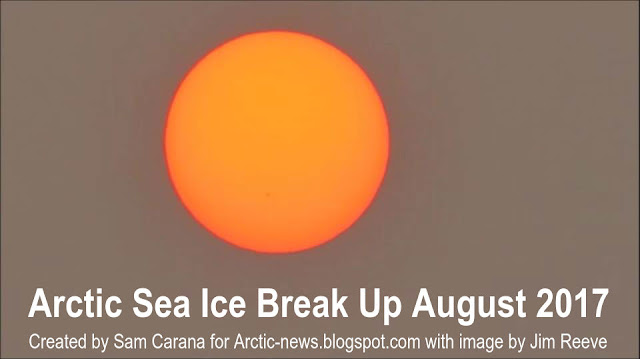 Sun at 8:00 am, captured by Jim Reeve on August 7, 2017 near Sechelt AirPort, B.C., Canada Arctic sea ice is under attack from all sides.  At this time of year, the sun doesn't set at the higher latitudes. As the image below shows, it was as hot as 94°F or 34.5°C in North Canada on August 13, 2017 (at the green circle, at 1000 hPa, at 00:00 UTC). Temperatures at surface level were as high as 33.1°C or 91.5°F at that location, where wind was coming from the south and blowing toward the north at a speed of 28 km/h or 17 mph at that time. Above image shows cyclonic winds over the Arctic Ocean pulling warm air from North Canada over the Arctic Ocean, while pushing cold air out. Winds and rain have been battering the sea ice for some time now, as discussed in an earlier post . Fires are becoming more devastating, as discussed in an earlier post . The August 2, 2017, satellite image below shows smoke from fires in British Columbia blanketing Vancouver and Seattle. Carbon dioxide (CO₂) l
Post a Comment
Read more

Arctic sea ice may well be gone by September 2017 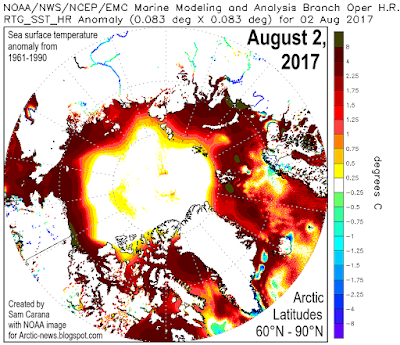 The Arctic Ocean is warming up fast and this is melting the sea ice from below. Sea surface temperature anomalies are well above 8°C (14.4°F) in several parts of the Arctic Ocean. The image on the right shows sea surface temperature anomalies from 1961-1990 for the Arctic (60°N - 90°N) on August 2, 2017. Global sea ice extent is at a record low for the time of the year, as illustrated by the graph below, by Wipneus . Lower sea ice extent means that less sunlight is reflected back into space. Arctic sea ice extent in 2017 is shrinking along a path that currently looks similar to the years 2012, 2016 and 2007, when sea ice reached 1st, 2nd and 3rd place, respectively, regarding lowest extent (image right). Arctic sea ice volume has been at record low since the start of 2017 and is currently similar to 2012, as illustrated by the graph below right, by Wipneus  (click on images to enlarge them). Arctic sea ice may look to be similar to what it was in 2012, when extent and volume reached lo
Post a Comment
Read more
More posts