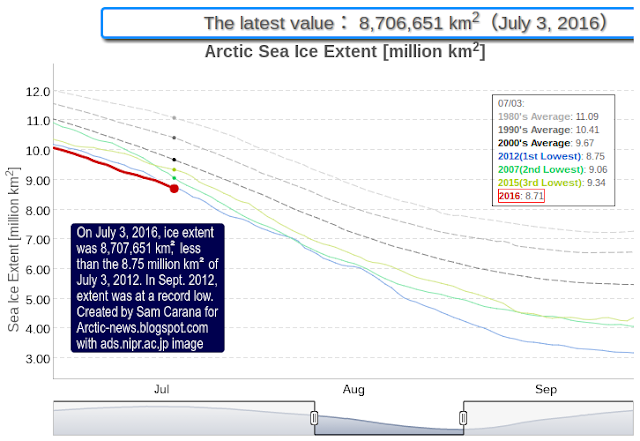 In September 2012, Arctic sea ice extent reached a record low. Given that extent now is only slightly lower than it was in 2012 at the same time of year, can extent this year be expected to reach an even lower minimum, possibly as low as zero ice in September 2016?

The ice this year is certainly headed in that direction, given that the sea ice now is much thinner than it was in 2012. The image below shows sea ice thickness on July 7, 2012, in the left-hand panel, and adds a forecast for July 7, 2016 in the right-hand panel.

Besides being thinner, sea ice now is also much more slushy and fractured into small pieces. The animation below shows that the sea ice close to the North Pole on July 4, 2016, was heavily fractured into pieces that are mostly smaller in size than 10 x 10 km or 6.2 x 6.2 miles. By comparison, sea ice in the same area did develop large cracks in 2012, but even in September 13, 2012, it was not broken up into small pieces.

As the sea ice disappears, less sunlight gets reflected back into space, resulting in additional warming of the Arctic Ocean. In October 2016, the sea ice will return, sealing off the Arctic Ocean, resulting in less heat being able to escape, at the very time the warmest water is entering the Arctic Ocean from the Atlantic and Pacific Oceans. The danger of this situation is that a large amount of heat will reach the seafloor and destabilize hydrates, resulting in huge abrupt methane releases that will further contribute to warming. When adding in further factors such as discussed e.g. at this earlier post, this adds up to a potential temperature rise of more than 10°C or 18°F compared to pre-industrial times in less than ten years time from now.