- June 05, 2016
Ocean heat content is rising, as illustrated by the image on the right. Where the sea ice declines, this is causing high air temperatures in the Arctic.

These high air temperatures are causing feedbacks that are in turn further speeding up warming in the Arctic.

Temperatures as high as 28.9°C or 83.9°F were recorded over the Mackenzie River close to the Arctic Ocean on June 13, 2016, at location marked by the green circle. 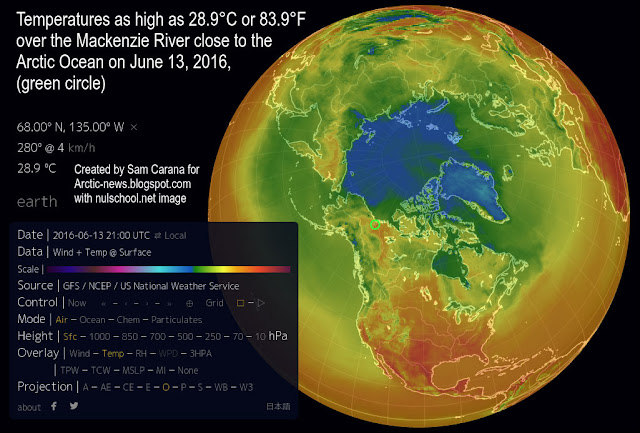 Below is a satellite image of the Mackenzie River delta on June 11, 2016

The image below shows that temperatures as high as 36.6°C or 97.8°F were forecast for June 13, 2016, over the Yenisei River in Siberia that ends in the Arctic Ocean. 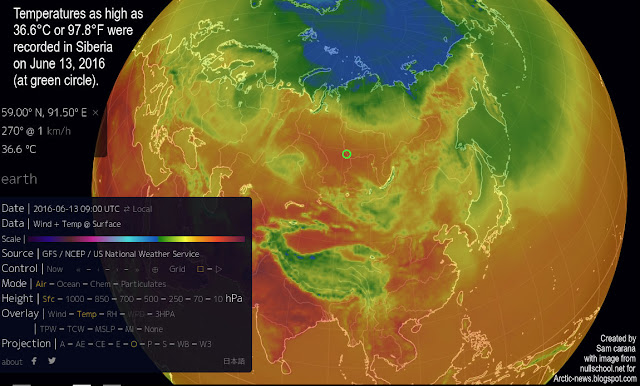 Earlier this month, temperatures in Eastern Siberia were as high as 29.5°C (85°F). This was on June 5, 2016, at a location close to the coast of the Arctic Ocean (green circle). 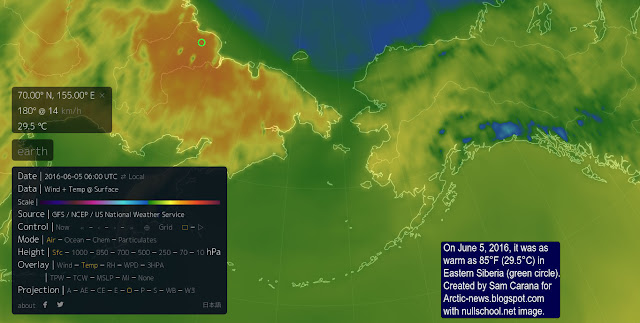 High air temperatures come with increased risk of wildfires, as illustrated by the image below showing carbon monoxide levels as high as 2944 ppb on June 4, 2016 (at green circle). 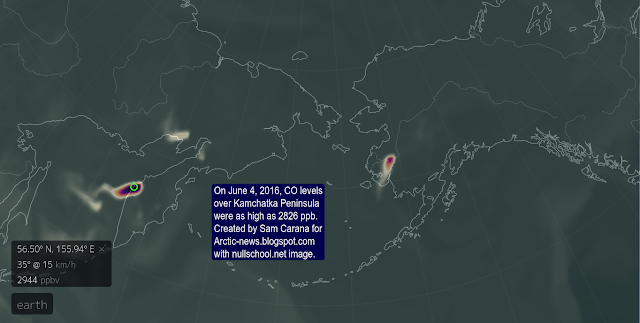 The satellite image below zooms into the area with these high carbon monoxide readings, showing wildfires on Kamchatka Peninsula on June 3, 2016. 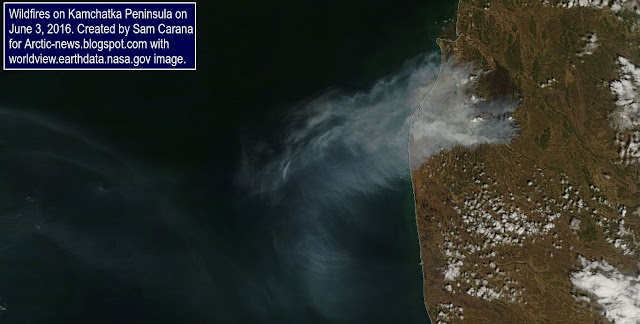 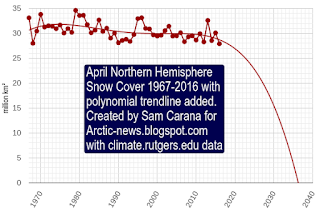 The image on the right shows that, this year, April snow cover on the Northern Hemisphere was the lowest on record. The added trend points at a total absence of snow by the year 2036.

Professor Peter Wadhams, head of the Polar Ocean Physics Group at Cambridge University, says: “My prediction remains that the Arctic ice may well disappear, that is, have an area of less than one million square kilometres for September of this year.”

Warming due to Arctic snow and ice loss may well exceed 2 W per square meter, i.e. it could more than double the net warming now caused by all emissions by people of the world, Peter Wadhams calculated in 2012.

Peter Wadhams further co-authored a study that calculated that methane release from the seafloor of the Arctic Ocean could yield 0.6°C warming of the planet in 5 years (see video interview of Thom Hartmann with Peter Wadhams below).

In conclusion, high air temperatures in the Arctic are very worrying, as they can trigger a number of important feedbacks, i.e. the ones discussed above and further feedbacks such as:

How much warmer could it be within one decade?

The two feedbacks mentioned by Peter Wadham (albedo and seafloor methane) are are depicted in the image below.

Additionally, as temperatures rise, further feedbacks will kick in more strongly, further accelerating the rise in temperature, as also discussed in earlier posts such as this one.

When also including further feedbacks, warming could exceed 10°C (18°F) within one decade, assuming that no geoengineering will take place within a decade, as discussed in earlier posts such as this one.

• Feedbacks in the Arctic
http://arctic-news.blogspot.com/p/feedbacks.html

• Albedo changes in the Arctic
http://arctic-news.blogspot.com/2012/07/albedo-change-in-arctic.html

• Three kinds of warming in the Arctic
http://arctic-news.blogspot.com/2016/02/three-kinds-of-warming-in-arctic.html