- October 01, 2015
As the 2015 El Niño gets stronger, the Northern Hemisphere continues to get hit by strong winds and cyclones. The image below shows strong winds over the Arctic Ocean, as hurricane Joaquin approaches the coast of North America. 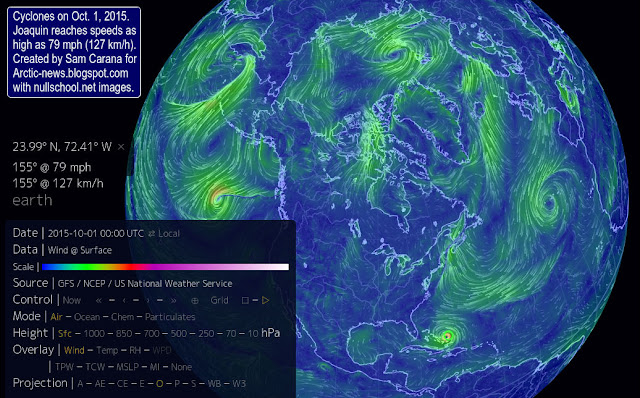 NOAA issued the image below on September 30, 2015, warning that Hurricane Joaquin is likely to cause wind damage across a large part of the eastern coast of North America.

The NOAA animation below gives an idea of the strength of hurricane Joaquin. 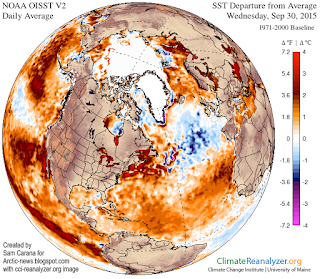 Meanwhile, sea surface temperatures off the North American coast, as well as in the Arctic Ocean, are very high, as illustrated with the image on the right.

In the Arctic Ocean, the sea ice in many places is now less thick than it was in 2012, as illustrated by the image further below, showing sea ice thickness on October 7, 2012 (panel left) and a forecast for October 7, 2015 (panel right).

The water in the Arctic Ocean was already very warm this year. The main factor causing both these strong winds and the dramatic decrease in thickness of the multi-year sea ice is ocean heat, as also illustrated by the image below, showing high sea surface temperature anomalies in the Arctic as at September 30, 2015. 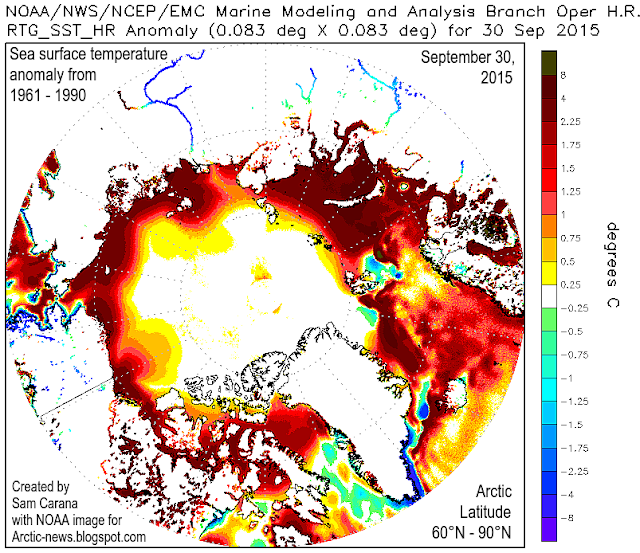 As the image below shows, nearly all the thick (over 3 m) multi-year sea ice has now disappeared, setting up a dangerous situation for the future that is much more dangerous than the situation was back in 2012. The thicker sea ice used to act as a buffer, consuming ocean heat in the melting process. Without thicker sea ice, ocean heat threatens to melt the sea ice from below right up to the surface, causing the entire sea ice to collapse as more open water will go hand in hand with stronger winds and waves. In case of such a collapse, sunlight that was previously reflected back into space will instead be absorbed by the water, causing rapid rise of the temperature of the water. In places such as the East Siberian Arctic Shelf, the water is on a average only 50 m deep, so warmer water is able to reach the seafloor more easily there.

The water of the Arctic Ocean is very warm, not only at the surface, but even more so underneath the surface. The danger is that strong winds will mix warm water all the way down to the seafloor, where it could destabilize sediments that can contain huge amounts of methane in the form of hydrates and free gas.

The image on the right illustrates the impact of winds over the East Siberian Arctic Shelf on September 26, 2015.

NSIDC specialist Julienne Stroeve recently warned: "In 2007 more than 3m of bottom melt was recorded by [an] ice mass balance buoy in the region, which was primarily attributed to earlier development of open water that allowed for warming of the ocean mixed layer. But perhaps some of this is also a result of ocean mixing."

As discussed in an earlier post, sea surface anomalies of over 5°C were recorded in August 2007 in the Arctic Ocean. Strong polynya activity caused more summertime open water in the Laptev Sea, in turn causing more vertical mixing of the water column during storms in late 2007 and bottom water temperatures on the mid-shelf increased by more than 3 degrees Celsius compared to the long-term mean.


As the 2015 El Niño gets stronger, the Northern Hemisphere continues to get hit by strong winds and cyclones. The image...
Posted by Sam Carana on Thursday, October 1, 2015