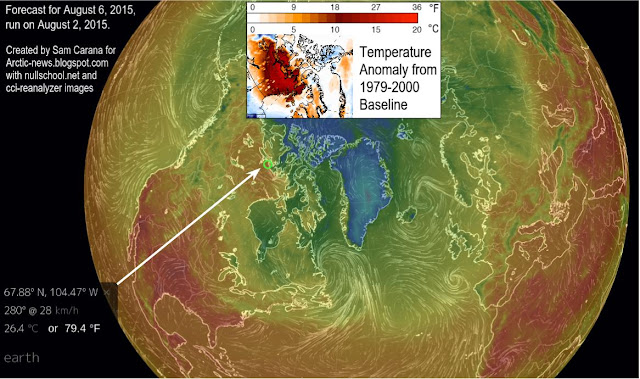 The satellite image below, captured on August 2, 2015, shows a close-up of the area, with the green circle in the same location as on above image. 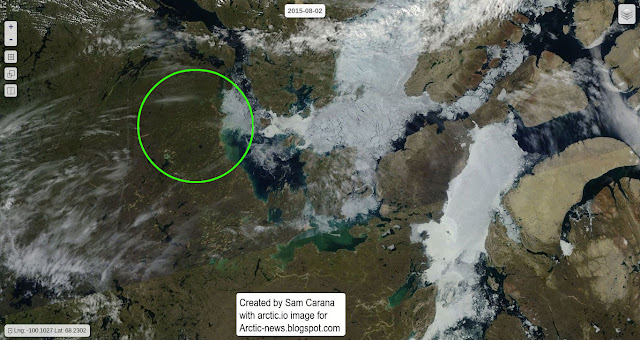 Above image shows that there still is some solid ice present to the right of the green circle. This ice may not be able to survive such high temperatures for long. Furthermore, above image shows what looks like smoke plumes from wildfires to the left of the green circle, another sign of the high temperatures in the area and another feedback that will accelerate decline of the snow and ice cover.

Disappearance of sea ice thicker than 4 meters is now taking place north of Canada and Greenland. It looks set to virtually disappear soon, as shown by the 30-day Naval Research Laboratory animation below, ending with a forecast up to August 10, 2015.

In my experience, sea ice thickness hasn't looked this bad for this time of the year since records began, especially when taking the loss of multi-year ice into account. Until now, the thicker multi-year sea ice used to survive the melting season, giving the sea ice strength for the next year, by acting as a buffer to absorb heat that would otherwise melt away the thinner ice. Without multi-year sea ice, the Arctic will be in a bad shape in coming years. Absence of thick sea ice makes it more prone to collapse, and this raises the question whether a collapse could occur not merely some years from now, but even this year. 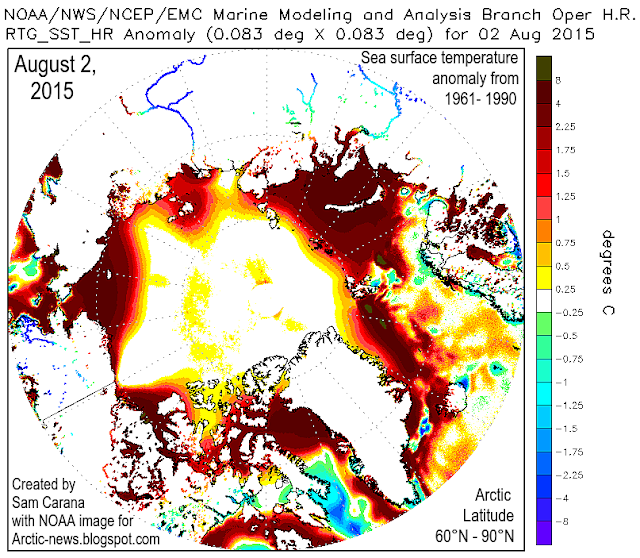 Above image below shows sea surface temperature anomalies in the Arctic on August 2, 2015. 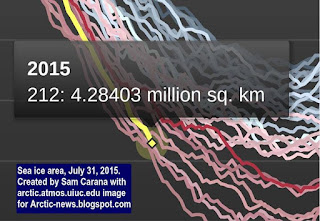 Greenland's dramatic loss of ice mass over the past few years and the subsequent meltwater may have caused the sea ice to be larger than it would otherwise have been.

Nonetheless, this has not halted the overall decline of the sea ice. As the image on the right shows, sea ice area now is about as low for the time of the year as it was for the three lowest years on record. Furthermore, thick sea ice is shattered if not gone altogether in many places. Meanwhile, ocean heat is at a record high and there's an El Nino that's still gaining strength.

In conclusion, Arctic sea ice looks set to take a further battering over the next few weeks and could end up at a record low around half September 2015. If things get really bad, sea ice collapse could occur and the remaining pieces of sea ice could be driven out of the Arctic Ocean altogether by storms, resulting in a blue ocean event as early as September this year.