For the first time since modern records began, monthly mean carbon dioxide levels were above 400 parts per million (ppm), as illustrated by the NOAA image below. NOAA just released the mean global carbon dioxide level for March 2015, which was 400.83 ppm. 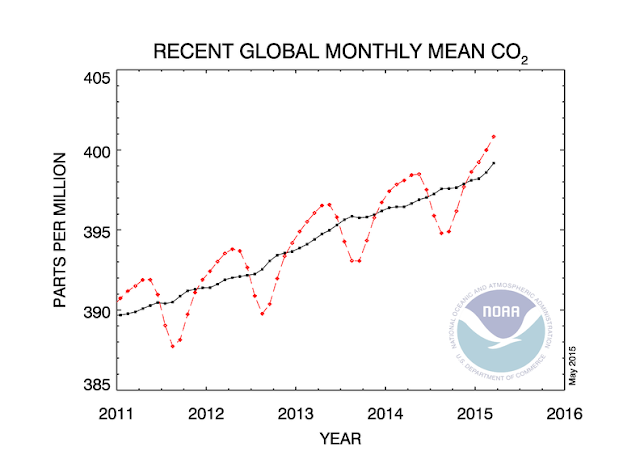 Arctic Ocean hit hard
Carbon dioxide concentrations can be especially high, i.e. well over 410 ppm, at higher latitudes of the Northern Hemisphere, as illustrated by the NOAA image below. This can contribute to very high temperature anomalies over the Arctic Ocean and thus increase the risk of huge amounts of methane erupting from the Arctic Ocean seafloor.
Since the start of the Industrial Revolution, carbon dioxide levels have risen non-linearly, as illustrated by the image below. 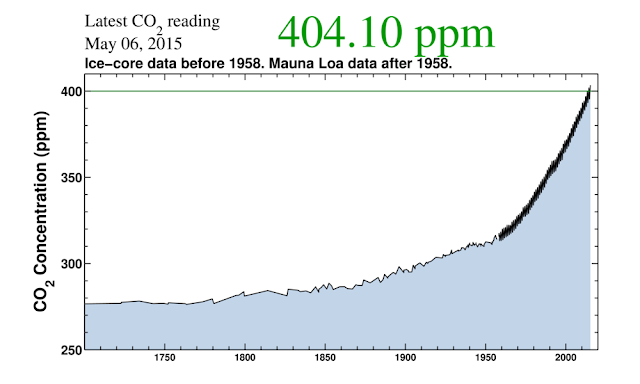 Need for Comprehensive and Effective Action

As many posts at this blog have warned, emissions by people and the numerous feedbacks are threatening to push Earth into runaway global warming.

This calls for comprehensive and effective action to - among other things - reduce atmospheric carbon dioxide levels back to 280 ppm, as illustrated by the image below and as further discussed at the policies proposed as part of the Climate Plan. 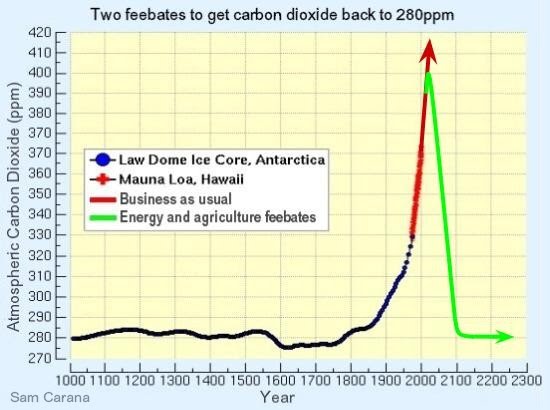 The Climate Plan calls for restoration of greenhouse gas levels in oceans and atmosphere to their long term average by 2100. In the Climate Plan, multiple lines of action are proposed to work simultaneously, in parallel and separately in their implementation, yet complementary in their impact. 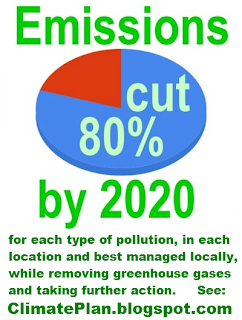 One line of action is to cut emissions by 80% by the year 2020. To achieve this, the Climate Plan advocates implementation of local feebates. Especially important are fees on sales of fuel, while the resulting revenues are best used to fund rebates on products sold locally that further help speed up the shift to clean energy.
Without further action, much of the carbon dioxide that has been emitted will stay in the atmosphere for hundreds, if not thousands of years. Therefore, further lines of action are needed, including removal of carbon dioxide from the atmosphere and oceans, with the carbon being safely stored.

For the long term average of 280 ppm to be achieved in 2100, large amounts of atmospheric carbon dioxide must also be removed and safely stored annually. How much must be removed? The period from 2015 to 2100 has 85 years, so bringing down carbon dioxide from 400 ppm to 280 ppm over that period works out to an annual removal of 1.41 ppm. By comparison, this is slightly less than the annual growth in carbon dioxide levels as caused by people since 1959, which is on average 1.47 ppm. Assuming that emissions will not be cut quickly enough to avoid further build up of carbon dioxide in the atmosphere in the near future, annual removal will need to be somewhat more, so 1.47 ppm looks like a good target for now, precisely because it equals past emissions.
The Climate Plan thus proposes that each nation will contribute to the necessary annual 1.47 ppm removal with a share that reflects its past emissions. The image below gives an idea of past emissions. Note that the image only shows emissions up to the year 2011 and that they exclude land use change and forestry emissions. Furthermore, the image shows emissions based on where products were produced. Much of the rise in emissions is the result of products that were produced in Asia, yet many of these products were consumed in Europe and North America. Therefore, graphs based on emissions where products were consumed would paint a somewhat different picture. The Climate Plan proposes that a nation's contributions to carbon dioxide removal (from oceans and atmosphere) will reflect its past emissions based on where products were consumed. 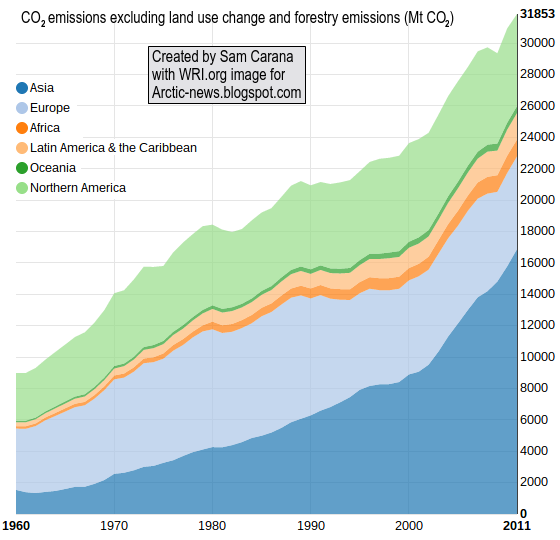 The Climate Plan advocates separate lines of action, i.e. greenhouse gas removal next to emission cuts and further action. Keeping action on different types of pollution separate and calling for local action in each nation further helps avoid that progress elsewhere is pointed at by a nation as an excuse to delay the necessary action on a specific type of pollution in that nation. 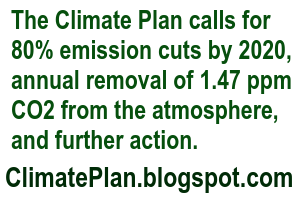 As said, the Climate Plan therefore calls for fees to be added on sales of polluting products where they are consumed (as opposed to where they are produced). Each nation is further expected to take steps to contribute its share to the 1.47 ppm carbon dioxide that needs to be removed from the atmosphere annually. Additionally, carbon dioxide needs to be removed from the oceans.

One reason why local feebates are recommended is that they can focus on achieving local targets for a specific pollutant. Local feebates allow communities to quickly adjust the height of the fees, where a local community threatens to fail reaching a target. Such a local focus does not preclude action being beneficial elsewhere as well. Indeed, the same feebate can work for multiple pollutants and on multiple lines of action. In this sense, locally implemented feebates often work complementary. As an example, the feebates pictured below will help remove carbon dioxide from the atmosphere and oceans, while they will also help cut emissions of carbon dioxide, methane, soot and nitrous oxide. 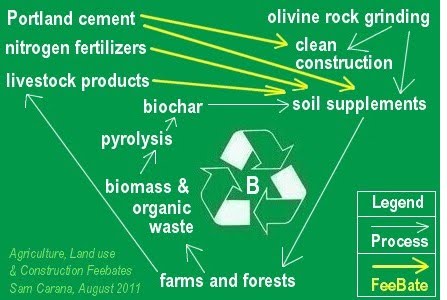